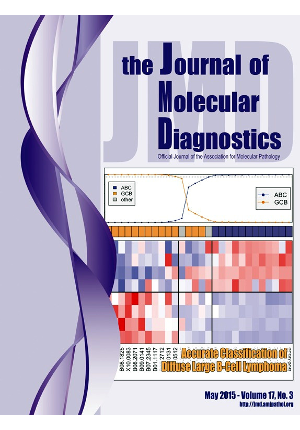 Diffuse large B-cell lymphoma, the most common non-Hodgkin lymphoma, is subdivided into germinal center B-cell–like and activated B-cell–like subtypes. Unfortunately, these lymphomas are difficult to differentiate in routine diagnosis, impeding the development of treatments. Patients with these lymphomas can benefit from specific therapies. We therefore developed a simple and rapid classifier based on a reverse transcriptase multiplex ligation-dependent probe amplification assay and 14 gene signatures. Compared with the Affymetrix U133+2 gold standard, all 46 samples (95% CI, 92%–100%) of a validation cohort classified by both techniques were attributed to the expected subtype. Similarly, 93% of the 55 samples (95% CI, 82%–98%) of a second independent series characterized with a mid-throughput gene expression profiling method were classified correctly. Unclassifiable sample proportions reached 13.2% and 13.8% in these cohorts, comparable with the frequency originally reported. The developed assay was also sensitive enough to obtain reliable results from formalin-fixed, paraffin-embedded samples and flexible enough to include prognostic factors such as MYC/BCL2 co-expression. Finally, in a series of 135 patients, both overall (P = 0.01) and progression-free (P = 0.004) survival differences between the two subtypes were confirmed. Because the multiplex ligation-dependent probe amplification method is already in use and requires only common instruments and reagents, it could easily be applied to clinical trial patient stratification to help in treatment decisions.